Anthony, Prosdocimo, Daniel and Justine, but not only

Perhaps not everyone knows that Padova does not have one, but four patron saints: Saint Anthony, Saint Prosdocimo, Saint Daniel and Saint Justine. In addition to them, pilgrims come to the city to venerate the relics of many other saints.

Saint Anthony is the most famous in the world. He was Portuguese and spent the last days of his life in Padova, in the spring of 1231: he was hosted by Count Tiso in Camposampiero in a plain refuge above a large walnut tree, where now the Sanctuary of Walnut stands. Placed on a cart pulled by oxen, on June 13 he asked to be taken to Padova: at the Arcella he murmured his last words, “I see my Lord”. Here the Antonian Sanctuary was erected: a stop of that Path that today affects the entire Peninsula with the Basilica of the Saint as its heart.

According to tradition, Saint Prosdocimo lived in the 1st century and, as a disciple of St. Peter, he was consecrated first bishop of Padova and evangeliser in many areas of Veneto. He died at old age in Padova around the year 100. His remains are venerated in the small chapel dedicated to him inside the Basilica of Saint Justine, which he himself converted and baptised. The iconography depicts him with the crosier and a jug, symbol of baptism. 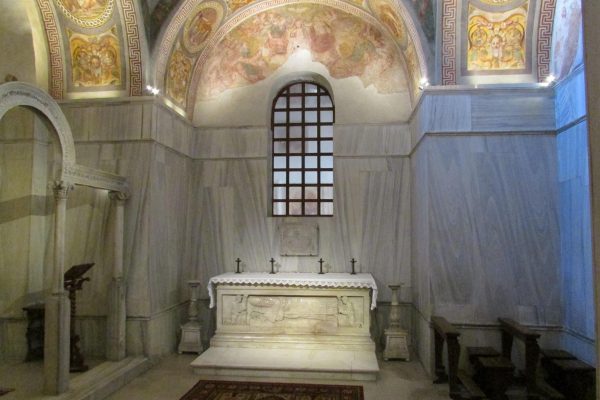 The figure of St. Daniel is quite mysterious: he was perhaps a deacon and most probably died during Diocletian’s persecutions in the 4th century. His remains lay with many others underground in the Basilica of Saint Justine, but were hidden during the barbarian raids and then forgotten. The saint then thought of appearing to a blind man from Tucsia (i.e. Etruria) telling him to go and pray in the Paduan oratory of Saint Prosdocimo where his remains were, and he would give him back his sight. The miracle happened and then the frantic search began, which soon brought to light the ark where his remains lay. On 30th January 1076 Bishop Ulderico decided to have the relics brought to the Cathedral, already dedicated to Our Lady of the Assumption: in all his fury, St. Daniel made the sky darken at the height of the current Via Umberto I. The sky became gloomy and threatening and St. Daniel made the ark containing his remains so heavy that it was not possible to transport them: it is here that the church of St. Daniel stands today, unfortunately without his remains.

Saint Justine belonged to a distinguished Paduan family and never professed against the tenacious Christian faith. Ambushed by the soldiers in Pontecorvo and brought before Massimiano, she was killed by sword on 7th October 304. On her tomb inside the Basilica of Saint Justine in Prato della Valle, three basilicas were erected in succession, and here lay the bodies of many other Saints: the already mentioned Saint Prosdocimo, Saint Massimo, Saint Urio, the Blessed Arnaldo from Limena abbot of Saint Justine, Saint Felicita nun, Saint Julian martyr and the remains of Saint Matthias Apostle. But the most significant relic is attributed to St. Luke the Evangelist, kept in the left transept of the current Basilica. 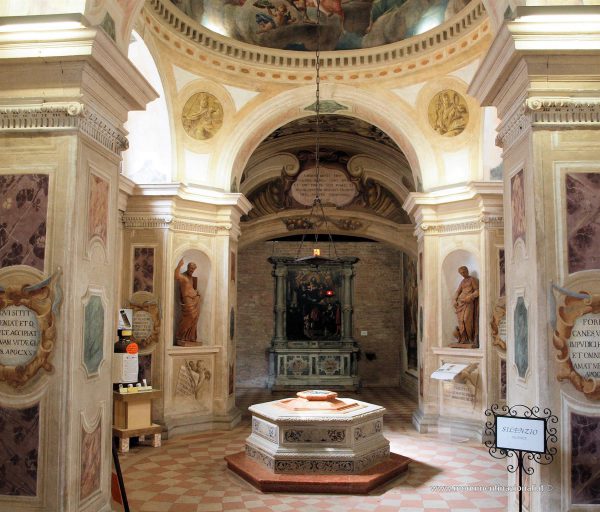 The highly venerated Church of the Transfiguration, better known as the Sanctuary of St. Leopold Mandic, a Capuchin Father who lived in Padova from 1909 until his death in 1942, stands in Piazzale Santa Croce not far from Prato della Valle. A place of devotion and pilgrimage, it was bombed in 1944: only the confessional of St. Leopold miraculously escaped the tragic event.

It may interest you

The Places associated with St. Anthony of Padua